Exploration is at the heart of everything we do 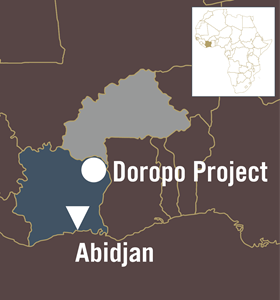 The Doropo Project (“Doropo”) consists of seven exploration permits, covering an area of approximately 1,850km2. Doropo is in the northeast of Côte d’Ivoire, approximately 480km north of Abidjan.

Geologically, Doropo lies entirely within the Tonalite-Trondhjemite-Granodiorite domain, bounded on the eastern side by the Boromo-Batie greenstone belt, in Burkina Faso, and by the Tehini greenstone belt on the west.

The Company began extensive exploration at Doropo in late 2015, building to a Mineral Resource Estimate of 5Moz in 2021. Following the positive outputs of a PEA completed in 2021, the Project is being progressed through to the PFS stage which is scheduled for completion in mid-2022. 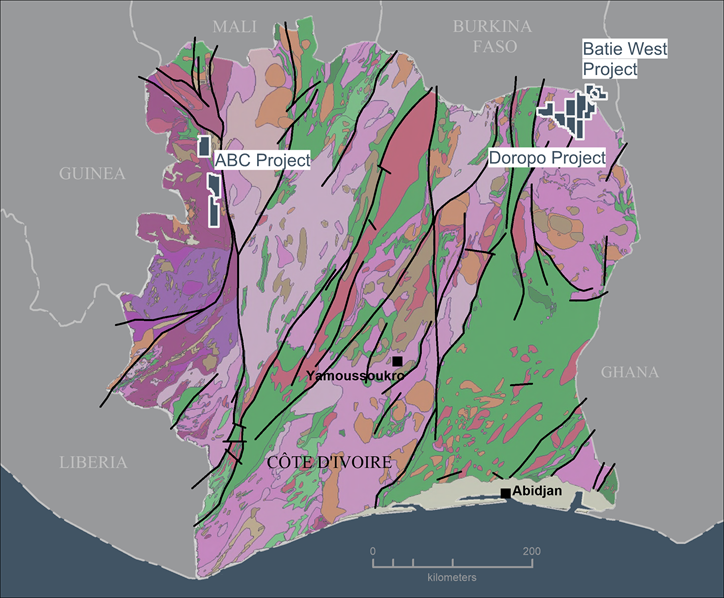 At the Project scale, the geology consists of fairly homogeneous medium to coarse grained granodiorite. Several of the deposits are intersected by regional, post-mineralisation diorite dykes.

Gold mineralisation occurs associated with discrete structurally controlled zones of intense silica- sericite alteration, focused within and along the margins of narrow (5-10 m wide to locally 20-25 m) shear zones. Outside of the mineralised zones, the granodiorite is fairly undeformed. The mineralised zones generally form clearly identifiable tabular bodies although this is complicated where two structures intersect, such as at the Nokpa deposit.

The currently defined mineral resource is formed of 13 deposits that lie within a 25km radius. 11 of these deposits are within a 7km radius, with Vako and Kilosegui 15km and 30km to the Southwest of the Main Cluster. 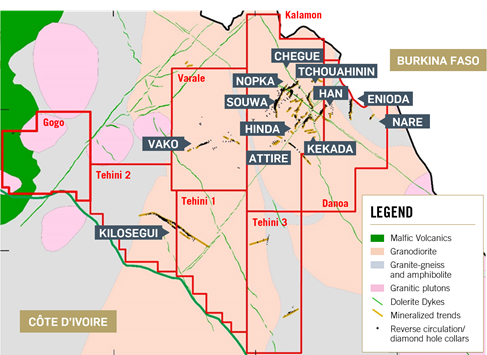 A PEA completed in 2021 confirms the economic viability of the project and suggests that it has the scale and potential to be Centamin’s next mine development:

The outputs of the PEA formed the basis for the decision to advance the Doropo Project to PFS stage.

The PFS will focus on a large infill drilling programme across seven of the Main Cluster deposits which contain 73% of the overall mineral resource inventory of the project.

This programme will include 70,000 metres of RC drilling and up to 18,000 metres of core drilling, and will provide closer spaced geology and grade data for a further Mineral Resource Estimate as well as drill core for metallurgical test work and geotechnical information. Drilling began in H2 2021 and the PFS is scheduled for completion in mid-2022, the outcomes of which will dictate the further development of the project.

Whilst the focus is on resource upgrade and conversion to define a pathway to value realisation, there are a number of resource growth opportunities providing upside potential in the long term:

The Souwa deposit currently hosts the largest resource and remains structurally open in all directions. Mineralisation extends over a 2.6km strike and dips 25o west to greater than 250m vertical depth.  Nokpa is centered on a high-grade WNW moderately plunging shoot. The high-grade core sits in a 200m long dilational jog created at the intersection of 3 major structures; the major Nokpa-Chegue Main shear, the Souwa shear, and a third major fault infilled by late dykes.  Mineralisation extends to 300m vertical depth and remains open.

Tchouahinin, located centrally within the resource area, 3km between Souwa and Kekeda, is a new satellite deposit. The mineralisation is currently defined along a 700m strike and remains open in all directions. At the Enioda deposit, drilling successfully bridged two smaller shoots into a coherent 2.2km long surface deposit which strikes north to south and dips 40° west. Enioda forms the southernmost section of a continuous 7km regional mineralised shear.

Outside of the 6km radius Main Resource Cluster, regional Doropo exploration focused on generative geochemical surveys on Tehini 1, 2 and 3 permits, Gogo and Bouna. The most significant discovery was the Kilosegui anomaly, a coherent 8km long gold in soils-auger anomaly with a strong subjacent magnetic structure, located 35km south-west of Souwa, straddling the Tehini 1 and 2 permit boundaries.  Further new additional target anomalies were defined in Kalamon, Danoa, and Gogo permits. 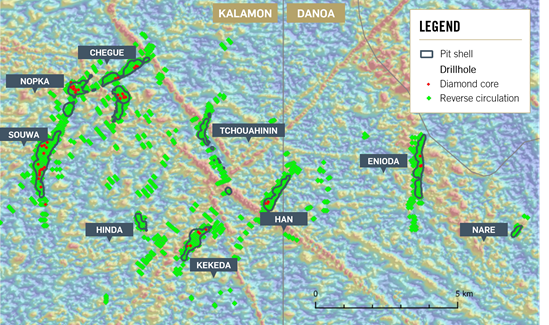 Mineral Resource for the Doropo Project, using a cut-off of 0.5 g/t Au. Resource estimate was prepared using JORC guidelines and meets the criteria of the National Instrument 43-101 Resources. 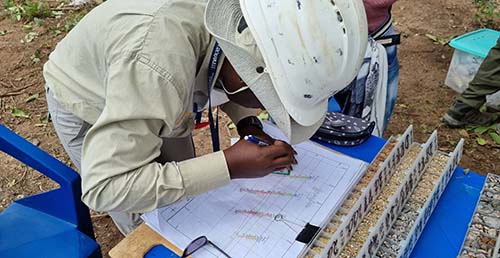